Many thanks to all who attended the safeguarding in education forum on 28th November 2017,  particularly to those who presented and to John Lyon School for hosting.  The presentations from the event are available below:

Thank you to everyone who attended a very successful Annual Conference 2017. The presentations from the conference can be downloaded below: 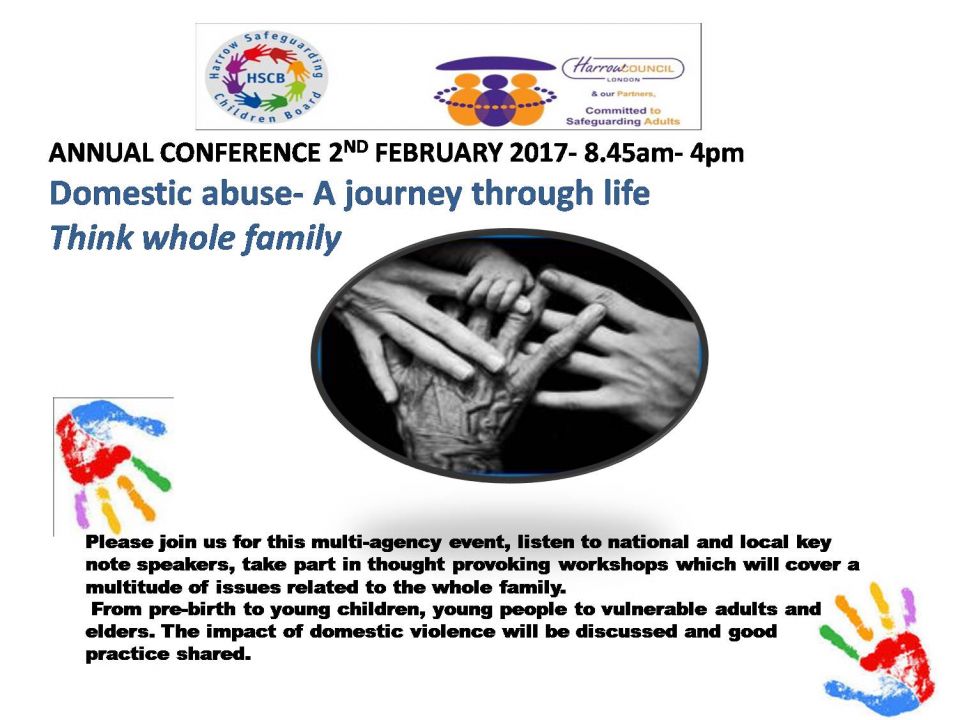 Thank you for all that attended a very successful Annual Conference 2016. The presentations from the conference can be downloaded below:

Following the success of the theatre production, HSCB has commissioned a re-run of ‘Chelsea’s choice which is due to take place early 2017.

What is ‘Chelsea’s Choice’?

Chelsea’s choice is an innovative 35 minute long theatre play highlighting the very serious and emotional issue of child sexual exploitation. The production shows how young people, boys and girls, are groomed by adults for the purposes of sexual exploitation using various methods, ensnaring young people and eventually taking complete control and dominating their whole lives. Students gained a better understanding of the devastating impact that sexual exploitation has on a young person’s life

The production received positive reception from young people in Harrow- listed below for the feedback.

The HSCB has just published its latest serious case review into the tragic death of a baby in 2014. To read the overview report, see link below:

FGM – new duty for reporting FGM (for under 18s) to Police

Some of you will be aware of the additions made to the Female Genital Mutilation Act 2003, introduced through the Serious Crimes Act 2015.  I particularly want to bring your attention to the new duty for regulated professionals to report to the police any concerns of FGM appearing to have been carried out on a girl aged under 18 (at the time of the discovery).  This duty comes into force on the 1st of October 2015.

The duty applies to professionals working within healthcare, social care and teachers.  A useful factsheet has been produced by the Home Office (attached).  Please ensure that this information and the new duties are disseminated and understood by relevant practitioners.

The Home Office is currently producing updated guidance – including agency specific guidance, following a recent consultation process and this will be published on our website as soon as it becomes available.

To apply for HSCB training on FGM see here.

Download Prevent Duty Guidance, which specifies guidance for authorities in England and Wales.